Polynesia is an interesting destination because there are so many islands. We decided to mix and match among the only two pacific island restaurants we could find in the bay area: Prubechu which serves high-brow Guamanian cuisine, and Polynesian luau, a Samoan family-owned convenient store that also serves some home made dishes.

Some of the food selections at Polynesian Luau

Even though they both represent the Pacific Island region, these two restaurants served very different cuisines. We started with Polynesian Luau were the staff were extremely warm and friendly, eager to teach me about their food and culture. After looking curiously at the food for a while (I obviously didn’t know where to begin) the lady behind the counter explained to me that instead of eating their meals with rice, potatoes, or noodles, they generally eat taro and banana. She then suggested I order a combination plate which includes the taro and banana along with three protein dishes. I gladly accepted her suggestion and ordered the turkey tail, coconut lamb, and lamb curry dishes.

I set the table for the rest of the Foxes so we could have our first taste of Polynesia. We all agreed that the food was greasy, sweet, full of coconut, and overall delicious. Full of fat, the turkey tails were different from how turkey is generally consumed in the states. They certainly had much more flavor and a completely different texture than we’re used to. It was almost hard to believe it was turkey at all.

The curry was also a bit different from the spicy curries we’re used to. Samoan curry was sweet with a hint of coconut and a hearty portion of lamb. Lamb must be a popular meat in Samoa because the coconut lamb was also cooked to perfection. In addition to the obvious ingredients, the dish was covered with spinach giving the perfect combination of sweet and savory flavors. Everything tasted delicious, especially when mixed with the mild taro and young banana.

Immediately after this opening Polynesian meal, we hopped over to the nearby Pacific island of Guam via the restaurant Prubechu. With the trendy Mission SF décor and mood lighting, the ambience was a complete 180º and the food was slightly more of an upscale version of Pacific islander cuisine. 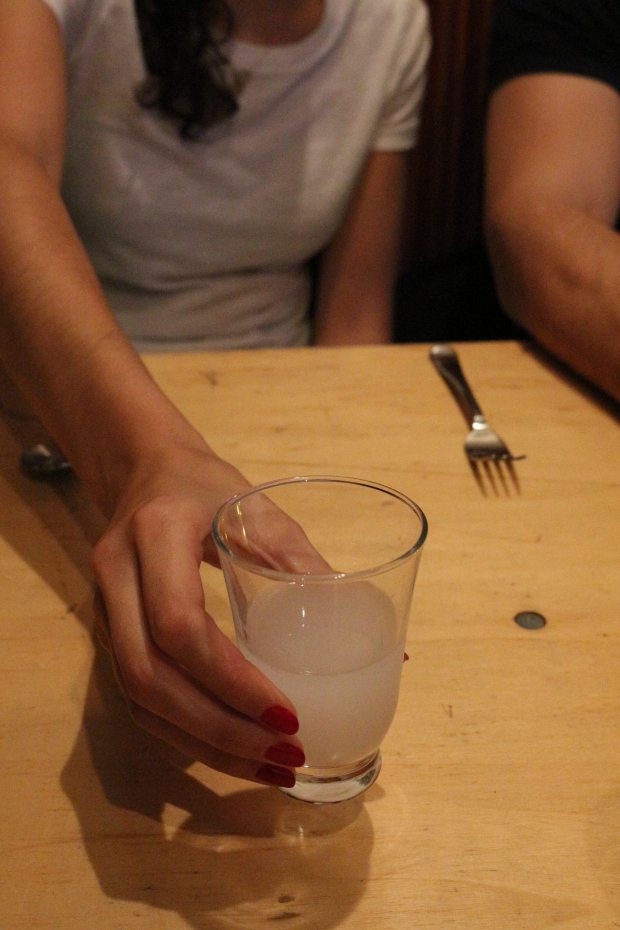 We started with a small local drink called Tuba, or fermented coconut wine. Although it smelled quite strong, it didn’t taste at all like alcohol even though it shared a similar alcohol level as wine. After the drink we ordered a few dishes: coconut pancakes with tuba butter (made out of the same alcohol I had tasted earlier), tinaktak or coconut beef with pasta, and red rice with pork belly and bacon. None of these dishes disappointed us. 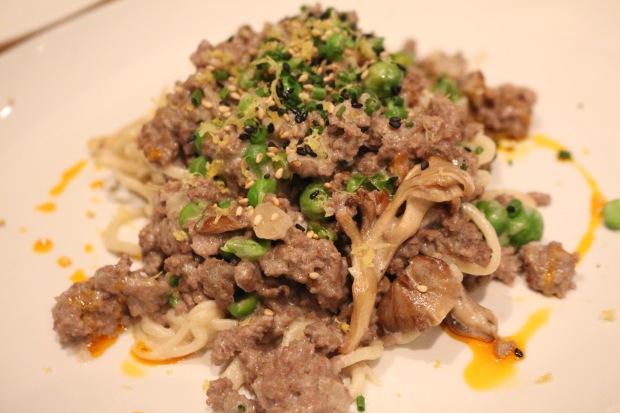 The coconut beef with pasta had a great mixture of sweet, savory, and familiar flavors. The pancakes were also familiar to us as we’ve seemed to build a pattern of ordering different varieties of savory flatbreads at most of the other restaurants we visit. The tuba butter was a nice touch, adding a Polynesian sweetness to the dish.

The red rice was more exotic for us with its amazing pork belly and bacon, cooked in a way I had never encountered before. It was thickly cut, crispy, and full of flavor.

For our soup we ordered the caramelized potato soup. This was probably one of the most beautiful dishes we’ve been served on our journey. It was delicious and full of colorful garnishes, even small flowers. It was a sweeter and more flavorful version of a typical potato soup. Finally for dessert, we ordered the bonelos aga, or deep fried bananas with (yet again) the tuba sauce. The dish was delicious, tasting mostly as one would expect. Deep fried bananas topped with powdered sugar can never disappoint me!

Overall Polynesia was a great experience and we were able to island hop from Samoa to Guam tasting the Pacific Ocean like we never had before!

Exploring the World through Food

Our goal is to travel the world by restaurant. We will tackle each country by spoon, one per week, in geographical order and in true Fox fashion.